How has Covid-19 affected our emsTradepoint gas market?

And how does it compare against the fall and recovery of electricity demand?

emsTradepoint, a Transpower subsidiary, operates the commodity exchange for the New Zealand natural gas spot market. Here’s a reflection on the change in activity we’ve seen over the last three months.

During the week ending 29 March, we entered the Level Four lock-down and national demand for electricity fell by 9%. A week later, the story of falling demand continued. By 5 April, weekly electricity demand reduced by a further 8% and by mid-April overall electricity demand was down about 17% when compared to the same period in 2019. Moving into Alert Level 3, electricity demand began to pick up and the trend has continued back to normal levels of demand as our economy has re-opened.

During the same time period, the gas sector was relatively insulated from the shock to domestic demand for electricity, but highly impacted by activity reduction in the petrochemical and industrial sectors.

Demand for gas was significantly affected by the shut-down of some parts of a group known as the Major Gas Users. The following Major Gas Users either wound back production or shut down to a bare minimum:

We saw traded volumes on emsTradepoint’s exchange fall as demand reduced. While our gas market is often volatile, the initial hit from Alert Level Four was 47% as some of New Zealand’s large industrial users of gas wound back activity. These low traded volumes continued throughout the lock-down.

The graphs below compare the traded gas volume on our exchange against electricity demand through the time we’ve spent in Alert Levels Two, Three, and Four.

Who was trading gas during this time and why?

During April, traded volume on the spot market was made up exclusively of gas being bought and sold for pipeline balancing.

How did gas market activity compare to gas demand volumes?

Market participants use our emsTradepoint market products to optimise their natural gas portfolio, alongside ad hoc contracts and long-term bilateral agreements to fulfil their needs.

Reduction in volumes traded on emsTradepoint were disproportionally low when compared with the overall reduction in gas that flowed through the pipeline.

We suggest the reasons for this were that our market participants were focused on day-to-day activity rather than positioning their gas book for the months ahead, due to uncertainty around Covid-19. It seems a long time ago now, but back in April, like many others, we really didn’t have a sense of how quickly we would reduce alert levels and what business operations would be able to be resumed when.

We also had our main broker take leave during the lockdown period. Brokered activity has always had a significant impact on increasing the volumes going through our platform. Brokered volume generally ranges between 40% - 60% of traded volume. During April this was 9%, and May was 26%. June was back up to normal levels, at 50%.

Did electricity and gas prices move in synch?

The electricity market started seeing a downward shift in prices within the first couple of days of lock-down due to the closure of all non-essential businesses. Prices fell and remained low for the entirety of April.

By the end of April, as New Zealand moved into Level 3 and some business resumed, electricity prices remained at levels that were $30-40/MWh lower than pre-Covid-19 prices. Two weeks into May, electricity prices jumped up by 50% to $102/MWh in the North Island and $93/MWh in the South Island. This was underpinned by low North Island hydro storage, low wind generation and demand returning to levels expected for the time of year. At times demand was even higher than what we would have expected in 2019.

In the gas market, prices were much more volatile than under normal market conditions. Due to low volumes, prices on a day were not necessarily reflective of the state of the overall gas industry during lock-down. When volumes on the spot market are low, any balancing actions by the System Operator can have a distortionary effect on market prices. The System Operator is generally a price taker on the market, distorting market prices in either direction depending on whether they are on the buy-side or sell-side.

The graph below shows there was a slight downward trend in market prices for gas during April, however there is no clear trend coming out of the lock-down period (so far). 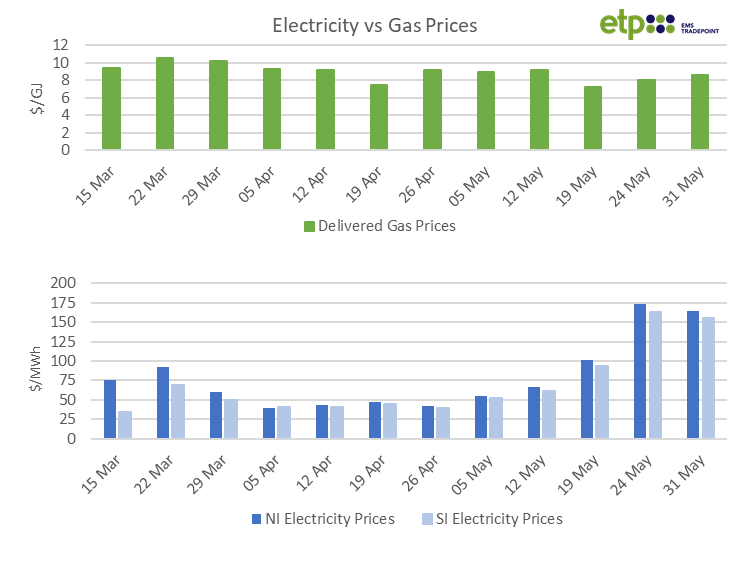 What role has gas played in electricity generation through this period?

Gas generation as a portion of electricity generation was at 9.3% for the week ending 29 March when we went into Alert Level Four - 63.02 GWh. Throughout April these levels were sustained.

Gas-generated electricity has increased since this time. As of the week ending 24 May, gas generation was just shy of 12%. Now in June, we are seeing almost 19% of total generation from gas.

Since April, hydro levels have been below the average for the time of year and are on a downward trend. This, along with the arrival of colder weather and reduced wind generation (see this issue of Transpower’s Market Summary of 17 May 2020 ) is likely the reason that gas generation has increased over this time. 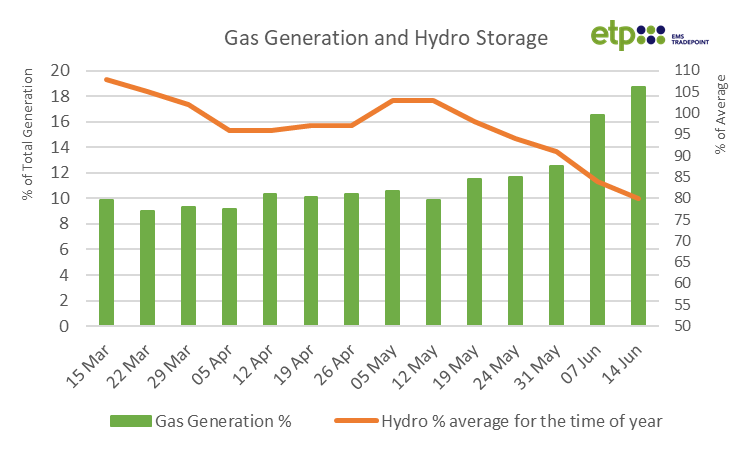 Our commodity exchange remains open for trading and we are watching our activity closely. Those Major Gas Users have gradually ramped up activity and delivered volumes on the pipeline have increased also. In recent weeks, production rates from the country’s largest gas field, Pohokura, have declined faster than expected. The causes and possible remedies are under investigation. This is one to watch with the decline providing potential uncertainty in the electricity market in terms of security of supply coming into winter.

We’re happy to chat with anyone who would like to know more about what we do and what’s happening in our marketplace.